BurntOut is a single-player, first-person, role-play simulation to help medical students identify and address burnout situations they may encounter during medical school. In the first 2 weeks of development, we were able to create a minimal viable product that incorporates the main educational purpose of the game and the supporting interactive elements dealing with the patient NPCs.

BurntOut is pretty narrative heavy, with different rooms having scenarios and each of those scenarios having multiple choices. Keeping this data easy to manage was important to us since it will be used and changed a lot.

A custom Unity editor window has proven great for managing this data. It talks to a NarrativeManager game object in the scene, and provides the user with a convenient way of customizing the narrative. The custom editor also has enabled us to export and import the narrative data more easily. It’s now trivial to have different people working on different scenarios at once, despite them being in the same scene. 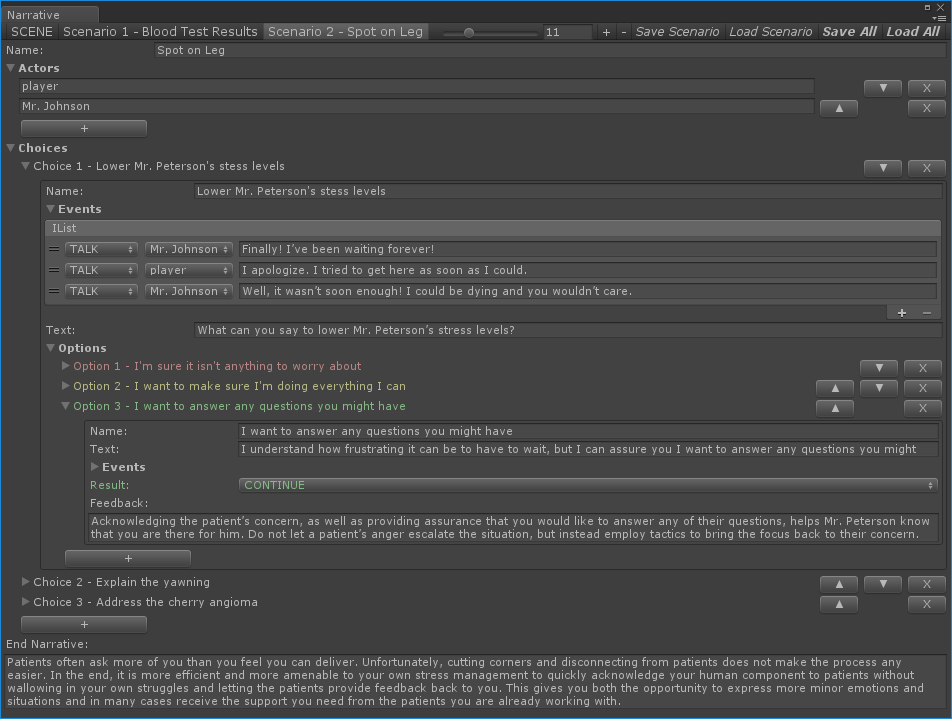 There are some issues with font size at the moment, as Unity wasn’t made to handle editing a lot of text in its editors. Font sizes can easily be increased, but increasing the heights of UI elements relative to those font sizes is far less trivial. Using custom editors can sometimes require some more convoluted steps, but they’re generally able to do everything we could need it to do, and they can make development a lot easier once they’re made.

Using the narrative framework we had created, we simply had to give the different parts unique identifiers, and we were able to easily refer to that data during the actual gameplay!

After the framework was incorporated into the basic gameplay, we decided to begin importing and testing a lot of the models in order to supply feedback to our artists, and to catch any performance issues relating to graphics/rendering early in development. Additionally, we began to add post-processing elements to the scene in order to play around and see what kind aesthetic feel we desire to achieve.

The primary focus of BurntOut is to educate the player about coping mechanisms for dealing with burnout, which we do through various mini-games. Right now, we have the skeleton of two games working, with the inclusion of three more planned.

The other half of the gameplay is dedicated to exposing the player with “realistic” fictional scenarios that could occur during their daily activities as a medical student. This role-play provides the player with a “safe practice environment” where they can explore different choices. For the first level of the game, we are developing scenarios within a hospital setting.

The scene is divided into 8 different areas: 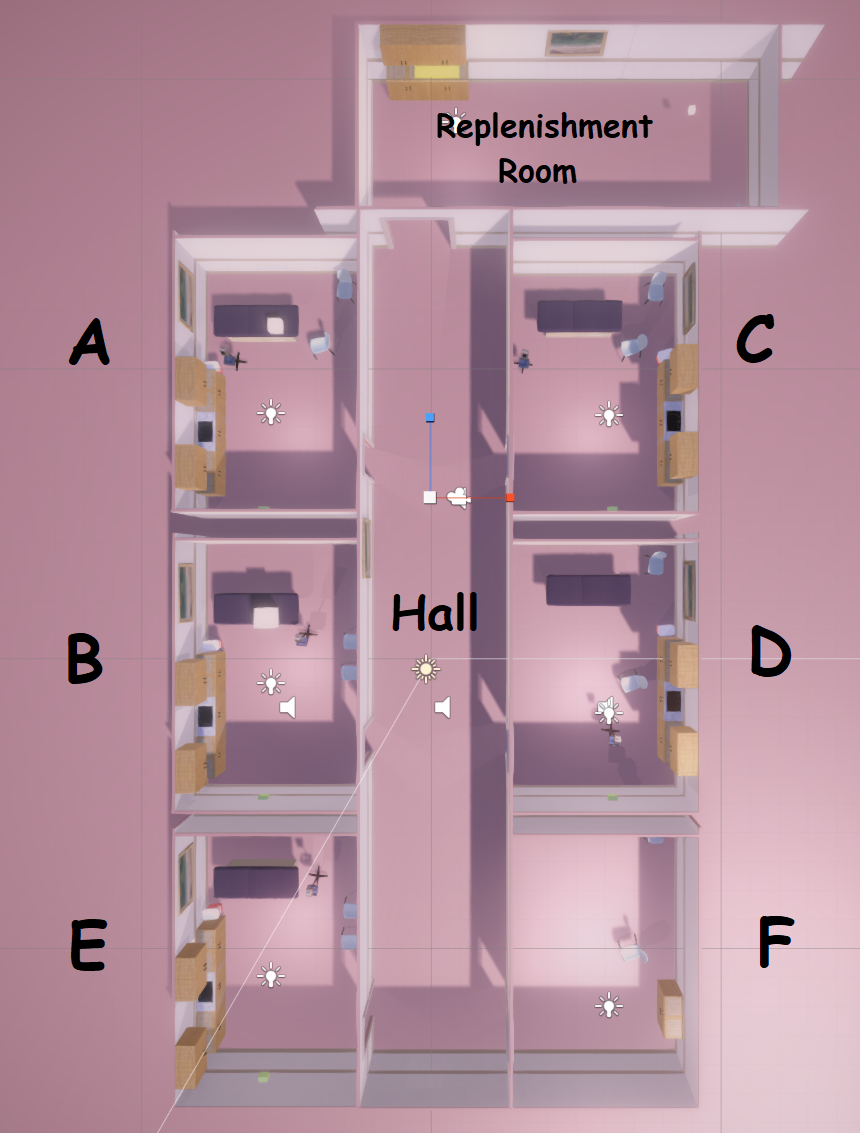 For now, three of the eight rooms serve functionality that influences the gameplay.

We wanted a more “free-roam” feel to the game instead of a more linear design. We laid out the level so that any room is accessible at any time. The rooms are also furnished and contain a little variation in layout to add to the realism. Additionally, they are well lit and contain ambient audio. Rooms C, D, & E will follow the same level design as both Rooms A & B and will contain unique narrative gameplay content. Room F will act as a vacant room and will not contribute to the gameplay for now, but may be included in future designs.

We look forward to continuing to refine BurntOut in order to create a playable one-level game within the next few months. You can read more about the BurntOut game at its website and follow along with our development on the blogs.